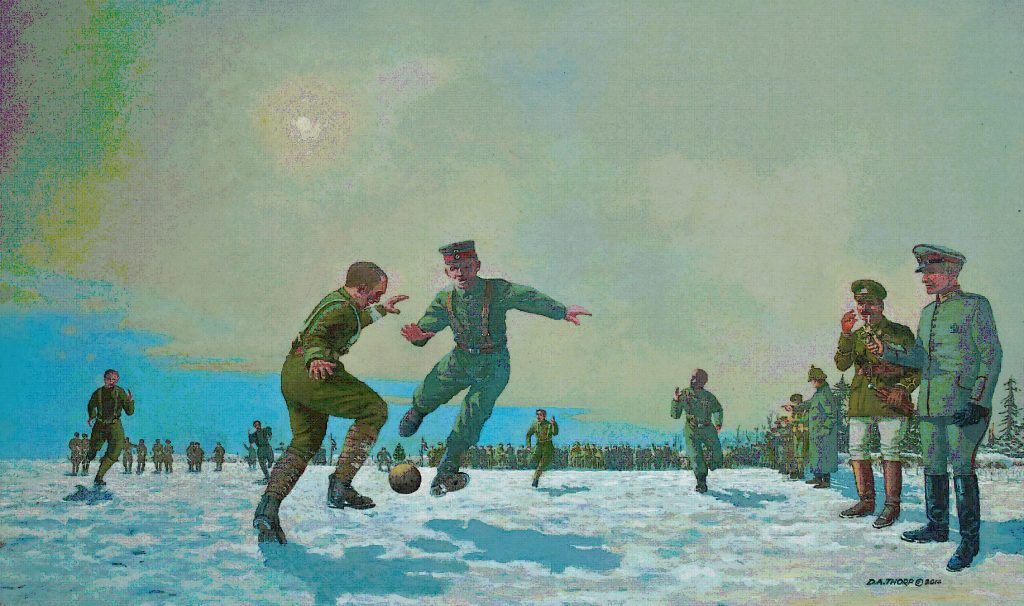 A Special Presentation is to be made at The Royal Cheshire County Show on June 24, 2015.

A framed, signed print of the painting “Let’s Play, not Slay” by David A Thorp will be presented to the last known descendant of Lt Charles Bertram Brockbank, 6th Cheshire Regiment, (1914.)

During the early part of WW1 in 1914, There were one or two impromptu ‘Truces’ between the opposing troops so that the bodies of their dead and injured soldiers on both sides could be collected from No-Mans land, that area of ground – sometimes as narrow as forty metres – between the German and British trenches.  These Collections were possible only because the shelling between both sides had stopped, and apart from some desultory sniper shooting, all was relatively quiet on the Western Front as it was known. According to reports gleaned later from survivors, there was a considerable amount of fraternisation during these truces, and this led tp a certain ‘camaraderie’ between the combatants as Christmas Eve approached.

There were troops from various  British regiments  – Welsh, Scots, men from Shropshire and Hampshire and many others fighting along the Front Line, and there were increasing reports of German and British Soldiers meeting each other in No-Mans land and exchanging small gifts – uniform buttons, even. Many were shaking hands and exchanging cigarettes and cigars.  Eventually, as the friendships blossomed, someone would produce a ball (or in one case a ‘Billy’ can) and a rudimentary game of football would ensue.  One in particular was between the 6th Cheshires and a German Saxon Regiment. This game used a real football – produced by a German soldier, and after the war Private Ernie Williams – on left about to kick the ball in the painting – gave an interview to the BBC Grandstand programme, and from information later gleaned, the painting of the match was produced. The painting is of course symbolic as at the time it was extremely cold and soldiers were well muffled up, and so for clarity it was decided to reduce the Muffling .

In the painting will be seen, on the far left CSM. Frank Naden pounding up to assist his chum. Frank Naden proved to be one of the most highly decorated men in WW1, and through rapid promotions finished the war as a full Colonel.  To the right stands  2nd Lieutenant Charles Bertram Brockbank, having a cigarette lit by a German Officer. Lt. Brockbank also survived the war and served as an officer in the Home Guard in WW2.

The Raffle has four prizes: the first prize being the original painting valued at £2,500. There are three other prizes with a total value of £450:00;  The Raffle itself is being held with a Local authority Licence, and is limited to ticket sales of £20,000, so 8,000 tickets will be on sale at £2.50 each.  The proceeds of the raffle will be divided between the Royal British legion and the Mercian Regiment, and both charities are supporting the 1914 Truce Society.

The final Draw of the Raffle will take place at the Cheshire Country Game Fair at Tabley, Knutsford, Cheshire  on August 31 2015. Appropriately the Draw will be made by none other than Paul Atterbury, well known for his exploits on the Antiques Road Show and as the author of the wonderful WW1 Book 100 Family Treasures.

Considerable research was undertaken to try and locate the last descendants of the three soldiers, but whilst the descendants of Frank Naden and Charles Brockbank have been located, the descendant of Frank Naden has since disappeared and there was a suggestion that he may have emigrated. If, as is hoped he is still in the UK then the Society would love to hear from him. His mothers maiden name was Hardisty, and from that he can be sure of his ancestry.. We would urge him to email the society by going to the website below.

The purpose of the ancestral research was to enable each of the descendants to be presented with a framed copy of the painting, signed by the artist at one of the Show grounds.

At the moment we now only have one descendant, and she will be presented with her framed print at The Royal Cheshire County Show on June 24, at 3:30 pm by the Lord-Lieutenant of Cheshire.

For any further information on the Raffle please go to: www.battlefields.art.com