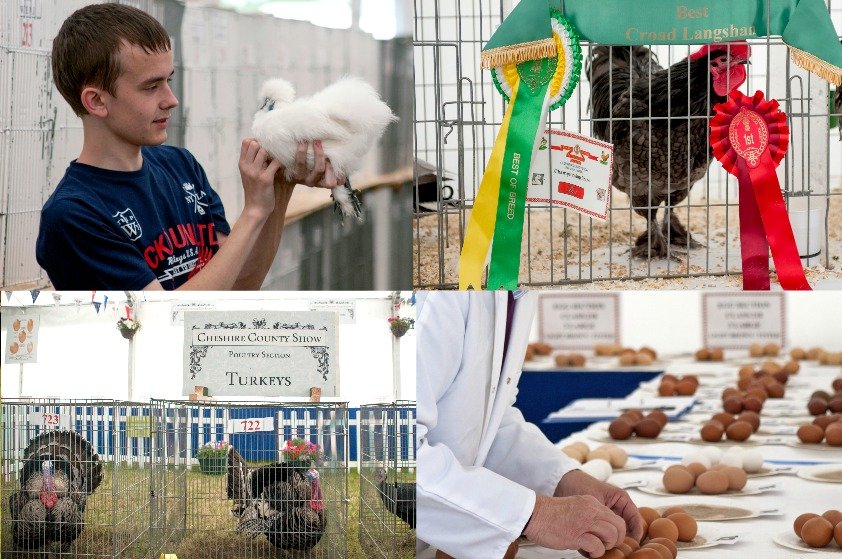 The shows, conducted annually as part of the Royal Cheshire County Show, have had royal status bestowed on them by The Poultry Club of Great Britain.

The Poultry Club of Great Britain regulates and administers the structure and status system of Poultry and Egg shows throughout the UK.

It allocates status to poultry exhibitions according to, among other things, prestige, size and the excellence of the organisation administering the event.

John Tickle, Chief Steward of the Royal Cheshire County Show’s Poultry and Egg shows, explained: “We were already championship shows because of the sheer number of entries we attract from right across the UK.

“But to be recognised as Royal Championship Shows puts Cheshire into a higher category of prestige which is even more desirable for competitors and is reflective of the agricultural show as a whole event.”

The recognition will also boost the scope of competition for exhibitors.

Previously, Egg Show competitors vied for one bronze award but with the new royal status, exhibitors will have the chance to compete for 10 bronze awards, one silver and one gold.

“This will attract more exhibitors which is good for us and the whole event,” Mr Tickle said.

“We would not have been able to receive this recognition and prestige from The Poultry Club of Great Britain unless we were attached to a royal Show, which we are now.”

The event became the Royal Cheshire County Show in January this year.

In Great Britain, the Royal Cheshire County Show is fortunate enough to boast the largest agricultural Poultry Show and the largest Egg Show.

To put this in perspective, when Mr Tickle was appointed as Chief Steward of the Poultry and Egg sections eight years ago, the poultry section was classed as a Regional Show as it attracted approximately 200 birds.

In 2013, The Poultry Club of Great Britain made the then Cheshire Championship Egg Show the first stand-alone Egg Show in the UK as it attracted more than 400 plates of eggs (egg entries) to its competition.

Mr Tickle and his team of six volunteers – Graham Fisher, William Pinlott, Chris Wise, Daniel Wise and Ben Pinlott – spend two weeks in the lead up to the event preparing the Poultry and Egg marquees for competition and display.

In 2016, the majority of the judging will take place on the first day of the Show, Tuesday, June 21.

On Wednesday, June 22, the Egg Marquee will become an interactive educational centre with three poultry judges on hand between 9:30am to 4:30pm where they will speak about different breeds and give expert advice on all things birds and eggs.

View the Poultry and Egg schedules – entries close on June 9.

The next Royal Cheshire County Show is on June 21-22 at the spectacular 300-acre Tabley Showground near Knutsford.

Tickets are now available for purchase via this website with discounts for early purchase.

• National Championship Show – this event is the jewel in the crown for the Club. Representing the pinnacle of the breeding season, it attracts more than 6,000 entries;