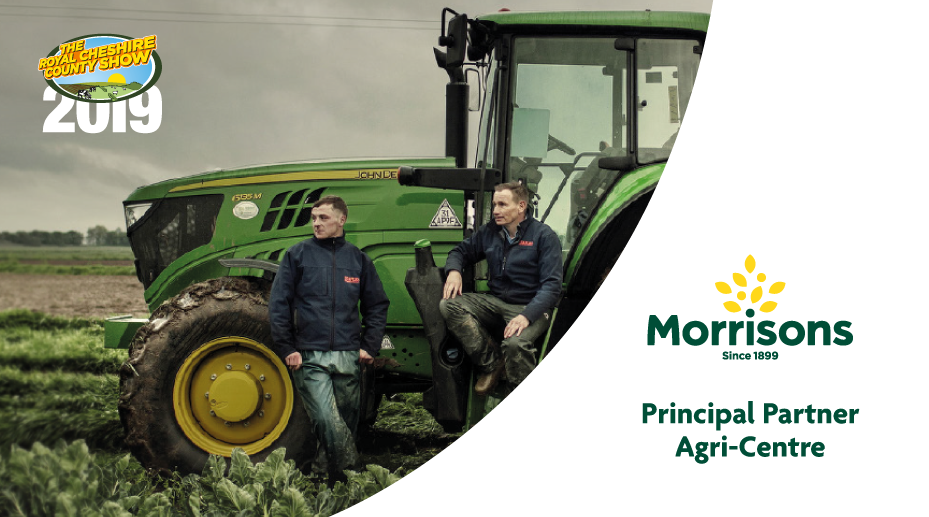 The Royal Cheshire County Show is pleased to announce that supermarket chain, Morrisons will be this year’s Principal Sponsor of the Agri Centre.

The Royal Cheshire County Show, which aims to encourage agricultural participation within its local community and surrounding areas, welcomes a crowd of thousands each year to experience Cheshire’s farming heritage and locally sourced produce.

Alongside Morrisons Sponsorship of the Agri Centre, a popular experience for those who would like to watch farming demonstrations, Morrisons will have stands through-out the Showground to showcase their projects outside of retail and promote career opportunities within the company.

Headquartered in Bradford since 1899, Morrisons is a British food retailer which serves over 11 million customers every week. Morrisons has its own sites which manufacture ‘Morrisons Makes It’ branded fresh food products, which makes up for more than half of the fresh food sold in store.

Rob Davenport, CIO of the Cheshire Agricultural Society, comments: “We’re delighted to welcome Morrisons as this year’s Principal Sponsor of the Agri Centre. The Cheshire Show gets bigger and better every year and with the addition of Morrisons added to our list of Sponsors, it truly showcases how the Show continues to excel!”

Sophie Throup, Agriculture Manager at Morrisons comments: “Morrisons is proud to be named as this year’s Agri Centre Principal Sponsor for the prestigious annual agricultural event, The Royal Cheshire County Show. Morrisons is British farming’s biggest supermarket customer and we’re proud to be involved with this event which pioneers the farming community.”

The sponsorship news comes at an excellent time for the Show, which has recently announced a line-up of new impressive attractions for the public to enjoy. The public can browse unique, artisan and home-made products for the first time at the Market of Maker’s, as well as being entertained by Roberts Bakery Band, sponsored for nearly 40 years by another of Cheshire Show’s Principal Sponsors, Roberts Bakery. The Roberts Bakery Band will be making their Show debut performing musical renditions of Queen and Rag ‘n’ Bone Man across the Showground on Tuesday 18th June.

To book your tickets for the Cheshire Show, held in Tabley, Knutsford on 18th June and 19th June, please click here.