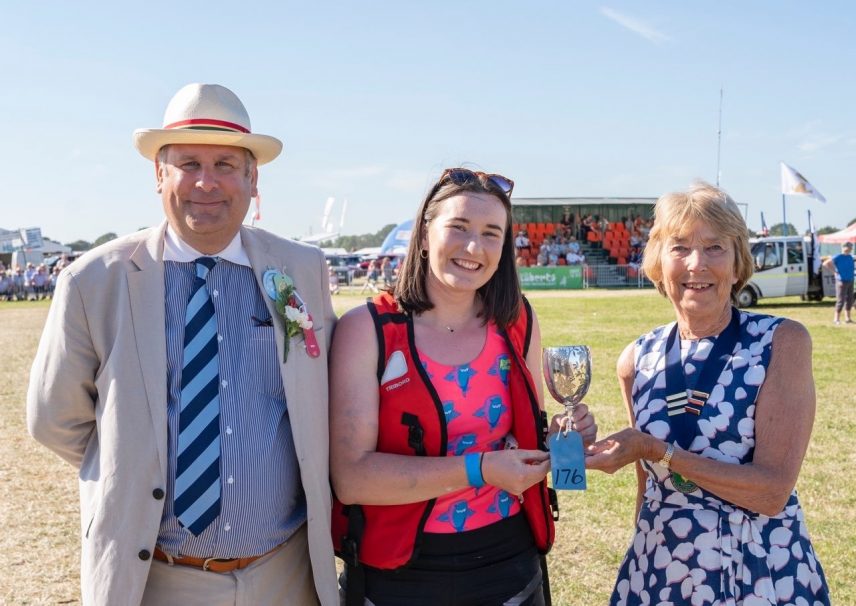 This year’s Young Farmer Development award was proudly presented to Fiona Wilshaw at The Cheshire Show.

Fiona has said “I am delighted to have been awarded the Ikin trophy for the Young Farmer Development award at The Cheshire Show. Thank You very much to Richard and John for their support. We had a great day and enjoyed taking part in the Young Farmer float competition. I also made a feature on BBC 5 Live’s Wake Up to Money earlier in the day, talking about how inflationary pressures are influencing rising costs of production on farming and why food is getting more expensive.”

Richard Ikin created and sponsors the YFD award some years ago. Richard has worked in Human Resources all his career and has always been an advocate of supporting young people at the beginning of their careers especially new emerging talent, together with his enthusiasm for agriculture he decided to sponsor an award which showcases Young Farmers in Cheshire. In conjunction with Cheshire Young Farmers ( CYF) the first YFDA was awarded in 2016, since which it has gone from strength to strength and is now a regular feature of the show with the award being presented at the end of the second day in the main ring prior to the CYF float competition and advisedly,  before the water fight!The idea behind the award is that the prize money supports the winner’s career/development, with previous award winners spending their money on initiatives such as enhancing existing fudge-making equipment on a small farm shop, upskilling themselves to attend a butchery course, a Sprayer tractor training course, and even a welding course.Richard adds that in jointly judging the competition,  every year, he sees great professionals entering the farming industry, which is very rewarding and encouraging to see and this year was no exception.In addition, the support from CYF has been fantastic and they are great in promoting the award.

You can read more about the Young Farmer Development award here: https://cheshireyfc.co.uk/2022/05/05/young-farmer-development-award-2022