We are pleased to announce that our previous Chairman Tony Garnett has been awarded the honorary degree of Doctor of Science (DSc), in recognition of his outstanding contribution to the County of Cheshire. In particular, for his role as Chairman of the Cheshire Agricultural Society, where he first took on the role in 2008 up until 2019. The Award was presented from The University of Chester and the Presentation took place at Chester Cathedral in November 2019. 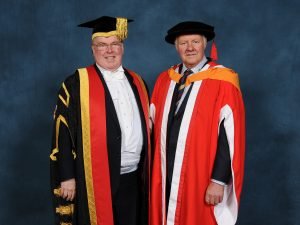 Here at the Royal Cheshire County Show we would like to congratulate Tony on this fantastic achievement.